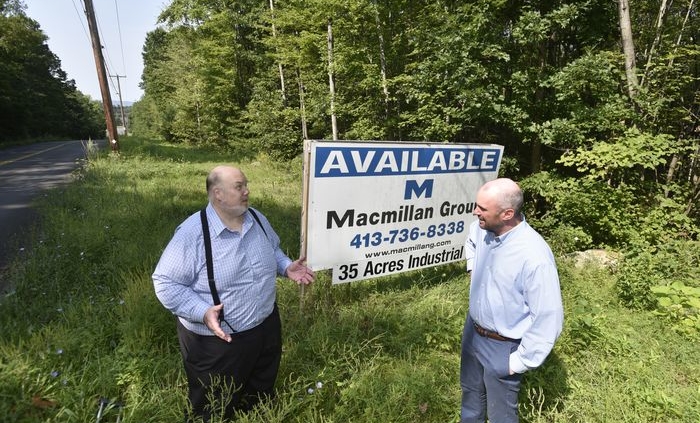 WESTFIELD — Developers want to build a campus of 10 data center buildings on what’s now vacant land on the north side of the city totaling, after 12 to18 years of phased construction, a $2.7 billion investment with 2.74-million-square feet of space over 155 acres.

Construction, if the project is approved by the city and state, would begin in 2023 with the first building and all the necessary power connections. That building would be done in the middle of 2024. Plans call for the last of the buildings to be completed in 2038.

Customers for the project could include the industry’s “Big 5” — Google, Microsoft, Amazon, Apple, and Facebook — along with smaller lesser-known data companies, said Erik J. Bartone, the director of the company doing the development, called Servistar Realties LLC.

Electronically “mining” for bitcoin or other cryptocurrency is not in the plans right now, he said.

“There is a huge industry growth that is going on right now in telecommunications, data, data processing,” Bartone said. “A lot of it was recently driven, obviously by COVID-19. It is a major transformations in how commerce is being done in the United States and worldwide.”

His company was drawn to the site just west of Route 10 and 202, because it’s on a major Eversource high capacity power line and because of Westfield Gas & Electric, as the local power provider the complex would buy power on the wholesale market. The site also has gas for heating, hot water and to fire emergency backup power generation.

Westfield is also close to airports including Bradley International Airport in Windsor Locks, Connecticut, and the corporate jet facilities at Westfield-Barnes-Regional Airport. The site is just 99 miles from Boston and in the middle of a a massive Northeastern market for data services with a population of 23 million people.

“Boston is an attractive address for corporate headquarters,” said Bartone, whose background is in electrical power brokering.

Bartone and his team are also impressed by the educational system in Westfield, with Westfield High School, Westfield Technical Academy and Westfield State University, as a source of employees.

There will be 400 permanent jobs at full build-out, he said. That’s 40 per building as the buildings are completed every few years. Salaries will average $100,000.

The project would also recreate 1,200 spin off jobs in the community, Bartone said.

He couldn’t say Wednesday just how much of the $2.7 billion would be spent in the early phases. But he said the first building is relatively more expensive because it requires the power facilities that are not yet there. The site already has the Eversource line running though it.

“This company is going to spin off other companies and people are going to want to be close to this data center,” Mayor Donald Humason said. “We have to think scope This is not a small server farm. This is huge,” Humason said the city’s been negotiating with Bartone’s team since the spring. Bartone said he’s been evaluating the Westfield site for a year or longer.

He compared it to the $165 million Massachusetts Green High Performance Computing Center on Bigelow Street between Appleton and Cabot streets in Holyoke. That center, which opened in 2012 as a partnership among Harvard, the University of Massachusetts and other research universities.

“This project on Servicestar could be 10 of those,” he said. “But instead of serving universities, it could serve the whole Northeast. And it would be here in Westfield.”

And it’ll be without the traffic and environmental concerns that have stymied development efforts on the property in the past. Failed projects include a gas-fired power plant, a freezer warehouse and a Federal Express depot.

All done in because neighbors objected to truck traffic.

“This is what we’ve been looking for, Humason said. But its not a done deal yet.

But Humason said the developer’s advantage is that they are building 10 three-story buildings.

“It’s not one huge warehouse,” the mayor said. “There is flexibility.”

There is also the developer’s proposed tax deal with the city. Called a 121 A, it would be a 40-year abatement that would absolve Servistar Realties of personal property tax on the computer equipment.

But even under the agreement, Seristar Realties would pay about $1.3 million a year in taxes in the first few years, Miller said. That would make it the largest taxpayer in the city.

Over time, the taxes would average more than $8.5 million a year in payments over the 40-year term, and more than $11 million per year after the full buildout of the project, according to Servistar’s application.

That means at full buildout, this project would not only be the largest tax payer but the size of the three existing largest taxpayers combined, said Richard Sullivan, president and CEO of the Economic Development Council of Western Massachusetts and a former Westfield mayor.

“It is going to be a significant number of good paying jobs. There are high-end jobs,” Sullivan said. “I think it is a development and an opportunity for a new sector in Western Massachusetts.”
Ward 1 Councilor Nicholas J. Morganelli represents the neighborhood. He said he’s hearing a lot of positive feedback. But some in the area are concerned about the loss of green space.

“There aren’t that many green spaces left. I hate to see farm fields developed. I wish there was another large, already paved-over space where we could put this,” he said. “But I guess the point is, there isn’t.”

Overdevelopment is a concern raised earlier this summer by the now-abandoned Carvana project in Southwick.

Bartone said energy costs are usually the biggest component in deciding a site for a facility like this. And historically, New England has been considered expensive,. But there’s a move to get data centers closer geographically to their customers, hence the need to be in the Northeast.

And the wholes purchase of power will help.

“That is our expertise,” he said.

Three are environmental components to the project. They are considering building with solar arrays that would generate some power. They are also evaluating the use of geothermal equipment to cool computer equipment. The buildings will likely have electric vehicle charging stations.

Bartone’s team plans to present its plan at an informational session for the Planning Board on Sept. 7. The tax deal has a City Council hearing set for Sept. 16.

Mixed-Income Housing Project at Ludlow Mills to Begin in 2022